The basic idea of “gamification” is the use of game elements in a non-gaming environment. The designer uses the elementary structure of video games, but out of the context of an actual video game. Duolingo wants to encourage users to learn a new language in a 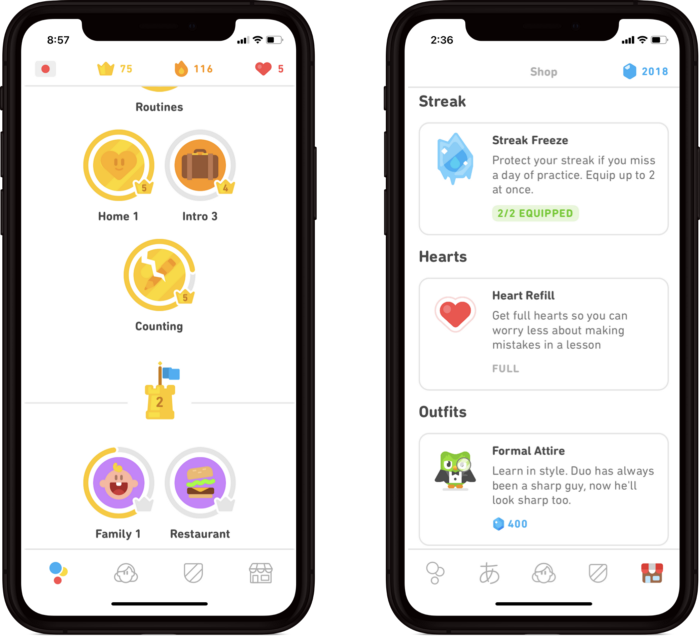 The lesson-based structure allows users to tackle areas of interest after completing the introductory lessons to gain a solid foundation. The learner can progress at his/her own pace and set goals by completing one lesson, ranging from 10 experience points (XP) to 50XP per day. Every completed lesson earns XP and in-game currency, which the player may redeem for

For a recent academic project, I explored the effectiveness of gamification in an educational context. To that end, I researched existing on-market products that use gamification for educational purposes. Duolingo was the most prominent example in this category in the field of

Based on conducted user experience (UX) research and empathy interviews, the author decided to revise some of the features to improve the overall learning experience of the Duolingo app. A special focus of this research was active Duolingo users and users that stopped using Duolingo before making significant progress (Duolingo compares 35h to 1 semester of university classes). Below is a list of frequently mentioned pain points of\from the interviewees, and a possible solution to

During the lesson, the app provides instant feedback (correct or incorrect answer). This is an essential feature to recognize and subsequently avoid error patterns. However, the app does not permit the learner to immediately self-correct and explore the error made. It simply moves on to the next question instead. At the start of each daily session, the user has five lives available, and for every instance of a mistake, a life is deducted. Once the user makes five mistakes during the lesson (losing five lives resulting in being locked-out unless buying themselves out with in-game currency), they fail the

Improving Duolingo’s grading system by allowing instant corrections and maintaining the game aspect: The user only loses a life when selecting that the answer be displayed, but not for the wrong answer

The error screen uses motivational language to encourage the user. The prompt simultaneously presents two actions: The primary action is to “try again” infinitely by returning to the question for self-correction until the answer is correct. The secondary action is to display the correct answer when the user is stuck, and to move on to the next question; in this scenario, the user

Pain Point #2
“I just want to learn basic speaking and reading for my next trip, but I don’t want a serious commitment to the language at

The intent to learn a new language is a decision that asks for a big commitment by the learner. Not every learner is willing or ready for it, yet many people want to learn at least a few words and phrases for a trip to a foreign country, as they consider it an important

Introducing new goal options to better acclimate users to three different levels of difficulty: (1) Learning for travel/tourism, (2) Learning to become a fluent speaker, (3) Learning for a business proficiency. The user remains in full control and can change the goal at any time, just like their

Pain Point #3
“After losing my 80-day streak, I cannot motivate myself to start

Continuous practice is essential for learning any language. Duolingo will send out daily reminders to catch up on lessons and constantly reminds the user with humorous messages. The goal is to maintain a “streak” by completing lessons every day. However, the user has to start their streak over, even if they miss just a single day, which can be frustrating and demotivating for users with low and high streaks. Unless they get a paid power-up to protect their streak beforehand, a so-called streak-freeze

Pain Point #4
“I cannot write or memorize the words from my Chinese lessons. I can only recognize them when the app shows them to me, even after months

People learn languages on Duolingo intending to speak them. However, writing skills will allow for better learning of the language structure and memorizing of learned content. Duolingo neither offers any writing exercises for learners of east-Asian languages, nor does it provide training on how to use such keyboards. Therefore, the user is forced to use other apps to cover their learning needs, which does not align with the acquired vocabulary in the

Duolingo should get users started on tracing and writing lessons for east-Asian languages, which will enhance their learning experiences and word memorization by leveraging the touch screen of the mobile device used. In addition, Duolingo should offer keyboard introductory classes for languages, such as Korean, Japanese,

Pain Point #5
“In my Japanese lesson I have to match Kanji (Chinese alphabet) words to the Hiragana (Japanese syllabary) equivalent, but I often don’t even know what the words mean that I am supposed

Triple-matching exercises for east-Asian languages with different writing system/s to help learners to match each word three times instead of twice: Users will have to match (1) the word, written in the foreign alphabet characters, with (2) the romanization (Hiragana for Japanese), and (3) the translation of the word in the user’s

Match triplets instead of twins when learning languages with different writing systems. In the example above, the user has to match the Kanji (子供) with the Hiragana (こども) and, as a new addition, the English

In conclusion, Duolingo is an efficient way to learn new languages, but motivational and experiential aspects are important to keep users learning on the platform on a daily basis. Even small pain points can result in big stepping stones on a path that can demotivate the user to be in opposition to Duolingo's mission statement of daily language practice to proficiency. This case study may help to diminish certain pain

Duolingo can benefit from the outcome of this case study by using the collected information in future updates. These improvements can increase the user base, revenue, and gain a

The other beneficiaries are the users themselves, as these solutions increase the user experience exponentially by increasing the value of gamified learning, yet challenging them enough to not lose interest in learning. Further, this case study aims to reduce the number of apps being used, servicing the users’ needs in one place, and the solutions above would augment their metrics.

Only constant consumer input and consumer listening to on Duolingo’s end can lead to increased engagement, making it a win-win for

Appendix: We have the words you've - Campaign Concept for

“I have considered using a language learning app, but I have never actually installed because it feels like a

The United States is known as the melting pot of the world. With those living in her borders coming from all walks of life. Many Americans are proud of there heritage but often only speak one language. Duolingo is here to 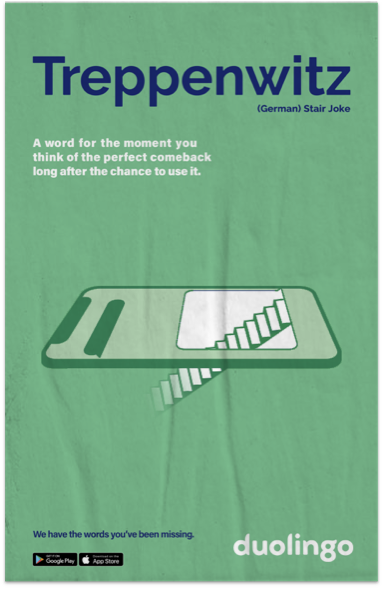 Treppenwitz. A a word for the moment you think of a perfect comeback long after the chance to 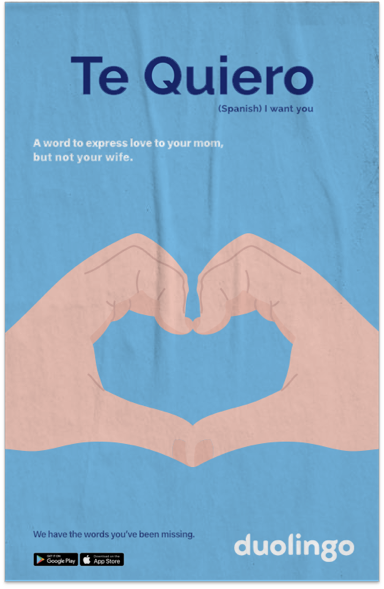 Te Quiero. A word to express love to your mom, but not 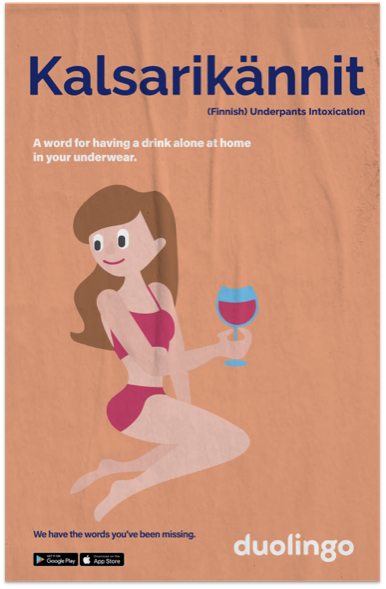 Kalsarikännit. A word for having a drink alone at home in

Please note: This is a classroom project purely for educational purposes and I do not claim any textual information

Over the years, the American Museum of Natural History (NYC) grew significantly. As a result, navigation became more complicated